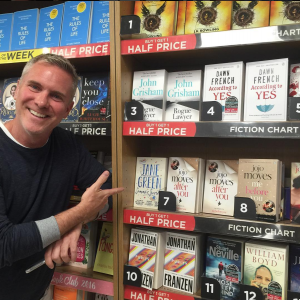 I am just back from a trip which was supposed to be with my husband, except it turned out it was on a weekend during which he had planned to visit eldest daughter at University, and so I decided to bring one of my best friends, aka my gay husband, instead.

I was ever so slightly nervous, because it has been years since I have travelled with anyone other than my husband. If I get moody, or tired, or overwhelmed and a bit tearful and shouty, he forgives me because he loves me. My gay husband loves me too, but in a different way, and I had a vague sense of anxiety that I might somehow facilitate a huge row, for which I would apologize, and he would forgive me, but things would never be the same again.

The car came to get me at five in the morning, and I tucked my little carry-on bag in the boot. Years ago, I watched the movie Up in the Air with George Clooney, and I remember almost nothing about it, other than that he travelled all the time, and he only ever brought carry-on luggage. Ever since, I too have only brought carry-on luggage. Whether it is a two-week book tour in the UK, an exotic ten days in the sun, a week skiing, wherever we go, I never bring more than one bag.

I have lost luggage twice, and both times were utterly miserable. Also, I have no patience. Once I am off the plane, I want to get out of the airport as quickly as possible. It does present some challenges. I tend not to bring perfume, shampoo, conditioner, or decent moisturizer. I make do with sample bottles found in hotel bathrooms that are sometimes gorgeous, but more often not enough to tame my strong frizz.

I have mastered the art of the capsule wardrobe. Three pants and six tops with two different pairs of shoes and a couple of scarves can work miracles on book tour. As can five or six very cheap, lightweight dresses, and spend every day ironing them as soon as I get to the hotel room.

My gay husband was waiting outside his apartment, with an enormous suitcase next to him. It was so big, it was almost a steamer trunk. “We’re checking luggage, right?” he said, noting my panicked expression. “No,” I said, as painful visions of hours waiting by baggage carousels flitted through my mind. “Want me to go and switch to carry-on?” he said. “Yes,” I said, as he disappeared back into the building to switch to a tiny bag.

We had a glorious time. I wasn’t moody, or tired, or overwhelmed, and not once was I tearful or shouty. It turns out we travel spectacularly well together. We ate delicious food, walked for miles every day, and are now planning our next European adventure. The only question is, what to do with my husband next time?

(This article was first published in The Lady Magazine.)