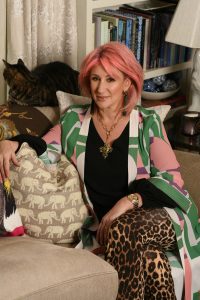 JANE GREEN IS THE AUTHOR OF TWENTY ONE NOVELS, INCLUDING EIGHTEEN NEW YORK TIMES BESTSELLERS, ONE COOKBOOK, AND VARIOUS SHORT STORIES.

She is published in over 25 languages, and has over ten million books in print worldwide.

She has been part of the ABC News team covering royal weddings, has had her own radio show on BBC Radio London, and has made regular appearances on TV and radio.

She contributes to a number of newspapers and magazines, and is a graduate of the International Culinary Institute in New York. Green is an avid cook, amateur decorator, and passionate gardener. She is also a regular storyteller for The Moth. Her first story for The Moth, Greener Grass, was video taped and subsequently went viral on Facebook, with over three million views.

A resident of Westport, Connecticut, she lives there with her husband and a small menagerie of animals. Her children swear they have flown the nest, but she’s not sure she believes them. In her next life she wants to come back as Elin Hilderbrand.