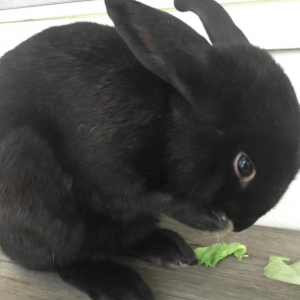 Stan the rabbit is not happy with his confinement. He has been living very happily on the porch these last few months, coming into the kitchen throughout the day to play with us, and the cats, tearing off into his porch when there is too much activity.

We had high hopes of him being a house bunny, before we realized that house bunnies eat everything. Three of the lamps in the living room do not work as Stan has chewed through the cords, and we have thrown away four iPhone chargers for the same reason. Although he is semi-litter-trained, it turns out rabbits mark their territories, much like cats, and so, after dry-cleaning the sofa cushions twice, Stan is now banished from all but the kitchen.

We bought him a very nice wicker igloo-type of house, which he promptly ate. Now there is only a roof. I kept looking at him, lounging on the wooden floor of the porch, feeling guilty. Surely a rabbit needs to burrow. Surely he needed a proper rabbit house.

I found a rabbit palace online. It is two stories, with a ramp, private sleeping quarters, and a rather charming gabled roof. It arrived weeks ago, flat-packed, which meant it was probably never going to be built, because no one in our house seems to have the time or the willingness to build flat-pack furniture.

Last weekend, guilt got the better of me, and we put the palace together. First of all, we put it in the kitchen, thinking that as Stan seems to like being with us so much, he would probably be happier in the kitchen. Stan was not impressed. He cowered in the corner of the palace, refusing to look at anyone.

We moved the palace onto the porch, but Stan continued to ignore his new home with its soft bedding, choosing instead to continue sleeping on the floor of the porch. This morning I came downstairs, and Stan was in the palace! Success! He looked cozy and warm. So cozy and warm, it never occurred to me that he might attempt a break for freedom should I absent-mindedly leave the door cracked open…

I am sitting at my desk, and Stan just appeared. In my office. On the other side of the house. He took one look at my aghast face, and bounded to the living room for safety. Every time I go near him, he leaps away. I have tried tempting him with lettuce and carrots, but he isn’t having any of it. He keep eyeing me defiantly, as if to say that now he’s free, he’s never going back to captivity again.

As I write, my husband is lying on his stomach on the living floor, waving leaves of romaine lettuce at Stan, who is a few feet away, and eyeing him suspiciously. I am closing my office doors and leaving them both to it.